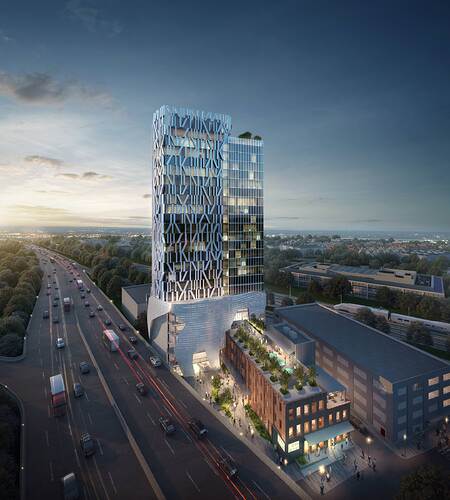 lohud: New Rochelle - Hotel proposed for Cedar Street, near I-95

NEW ROCHELLE - A premium hotel has been proposed for a site on Cedar Street, near I-95, which used to house a soul food restaurant.

Plans to develop 115 Cedar St. with a TRYP by Wyndham hotel were presented to the City Council on Sept 12. The developer, Dobbs Ferry-based WARD Capital Management, hopes to build a 24-story, roughly 225-room hotel tower behind an existing building.

Managing Partner and CEO D’Wayne Prieto said the company is enthusiastic about the project.

“We’re excited about bringing a luxury hotel to the City of New Rochelle," he said. Prieto described it as an “urban resort” that will attract people on short vacations.

The proposal includes plans for a rooftop pool, and an automated parking garage with over 320 spaces. Seventy-five rooms will be suites for longer visits. All of the rooms will be between 300 and 450 square feet, Prieto said.

The existing white-brick building, which is flanked by the interstate and a storage facility, will be restored and outfitted with lobbies, offices, restaurants and a rooftop lounge.

The property owners said they’re exploring options such as high-visibility crosswalks, signs and pedestrian lighting to better connect the site to the city’s downtown.

The project is anticipated to create 400 construction jobs and 150 permanent jobs.

Currently, there are two hotels in the city, a Radisson and a Residence Inn by Marriott. Both are located downtown. An eight-story, 80-room hotel with a restaurant and bar, named V Hotel, is under construction on Church Street, according to the city.

More details and insight within this Westfair article;

A plan from a Dobbs Ferry developer would add an “iconic” 24-story hotel along Interstate 95 at the northern entrance to downtown New Rochelle.

D’Wayne Prieto, managing partner and CEO of Ward Capital Management, is leading the effort to bring a 225-room “urban resort” to the city’s downtown edge at 115 Cedar St. The developer plans to team up with Wyndham Hotels Group, which will operate the property and brand it under the company’s TRYP hotel title aimed at avid travelers.

The developer received approval for a zoning amendment in October to allow hotel use for the small block of property where it will be sited, which is off the Cedar Street traffic circle surrounded by I-95 and its on ramps.

Speaking at the location with the Business Journal, Prieto said there’s a nostalgia factor in his plan to reuse the historic 1905 building. His wife, Jewelle Prieto, was founder and co-owner of Don Coqui, the popular restaurant and nightlife spot that operated from the second floor of the 3-story building from 2009 to 2015. Before Don Coqui, it was home to MacMenamin’s Grill and, before that, the manufacturing company Plastic Works.

Prieto described the idea for the hotel as one floating in his mind for years. During the Don Coqui years, he “spent many nights here seeing the flows in and out, and realized this location would be ideal for a destination. It was a destination as a restaurant. But there was no place to stay.”

The opportunity to act on his vision opened up when the property hit the market and Ward Capital bought it through an affiliate company in August for $3.65 million. A month later, Prieto and Wyndham officials brought plans before the city council to start the hotel review process.

The plan includes 150 standard hotel rooms and 75 extended-stay suites. The historic building at 115 Cedar St. would be renovated to include a hotel lobby, bar and elevator bank on the first floor, a restaurant and lounge on the second floor and office, meeting and conference space, as well as ballrooms, on the third. The roof would be converted to a landscaped terrace with an open-air lounge and bar.

The hotel rooms would rise in a 24-story tower behind the original building. As designed by Gregory Sharp Architect PC, the tower is meant to create an “iconic architecture identifiable and readable from I-95,” Sharp told the city council at a meeting in September.

A rooftop pool on the 24th floor will host another lounge for hotel guests only, featuring a bar, kitchen and pool with a hydro-floor that can be converted to flat ground for events. The floor will have views of the Long Island Sound, Westchester County and parts of the city, Prieto said.

“When you’re driving you’ll see the building and all its different shapes and forms and it will be a good welcoming to the town,” Prieto said. “You’ll always remember you passed New Rochelle because of this building.”

To address parking issues that could occasionally cause traffic to back up to the Cedar Street traffic circle, the hotel plan includes a 323-space parking garage that would include an automatic valet system as well as roads that will circulate visitors through the property with the aim of preventing any backups.

The developer also is exploring ways to add a pedestrian bridge across Cedar Street to better connect the site to the downtown.

The hotel’s restaurant will be run by Jewelle Prieto as the second location of Palo Vivo, described as a Latin-rustic restaurant and entertainment destination expected to open its first location in Hastings-on-Hudson soon. That grand opening will come at the historic former Farragut Inn at 555 Warburton Ave. D’Wayne Prieto’s company owns the three-level building and is converting it to include the restaurant and high-end apartments.

Ward Capital, launched in 2005, is also developing condos in New Rochelle and hotels in the Bronx and Long Island.

New Rochelle is a city with only two hotels, but a population heading toward 80,000, Prieto pointed out to the city council in September. There’s a 129-room Radisson Hotel and a 127-room Residence Inn. Another 80-room boutique hotel is under construction on Church Street.

The New Rochelle TRYP could not only add to that room total, but Prieto said it could create a “social networking hub” and resort for people looking for a relaxing weekend getaway to enjoy the spa, restaurant and rooftop lounge.

“We’re trying to help promote tourism in New Rochelle by being either a destination ourselves or by providing capacity for people who are coming to visit families, go boating, to the beach or the new arts programs we have here,” Prieto said.

He said the TRYP brand is popular with international travelers as well. TRYP’s only other regional locations are near Times Square and Newark, as well as in Atlantic City.

In the city council presentation, the developer estimated the project would generate more than $300,000 each year from the city’s 3 percent hotel occupancy room tax, as well as create 150 permanent jobs.

The proposal still needs site plan approval from the city, for which Prieto said he hopes to file soon. The hotel team also plans to petition the IDA for tax abatements to help with the project’s financing, which Prieto said is necessary given the large-scale parking construction the site will require to be viable.

In the zoning review, the project received positive comments from the board, other than a push for more parking spaces, which Prieto said he is exploring. Councilman Barry Fertel called it “one of the most exciting opportunities I’ve come across” in 13 years on the council. Mayor Noam Bramson praised the project’s design as a way to create a gateway for the city.

Prieto said that if approvals go as planned, he hopes his company can start construction in the spring of 2019 and open between 2020 and 2021.

@YIMBY - The project was approved at last month’s Planning Board meeting. Hope to see some action soon. They announced the news on Facebook today and included newer renderings.

Official press release from the City of New Rochelle

NEW ROCHELLE, NY – July 1, 2019 – In a move that will further enhance the vibrancy of New Rochelle and dramatically transform its skyline, the City Planning Board on Tuesday approved the development of a 24-story, 225-key globally-branded luxury hotel and event center in the City’s downtown. When complete, the TRYP Hotel by Wyndham will be the largest hotel constructed in Westchester County in the last 20 years and the first hotel of its kind in the lower Hudson Valley.

“We are excited to redevelop the existing industrial building and create a new, iconic tower,”saidD’Wayne Prieto, Managing Principal of Ward Capital Management, LLC, the developer of the project. “I asked that our architect, Gregory Sharp, design a building that would rival that of any architecturally forward-thinking city in the world. We thank the City of New Rochelle for its receptiveness of our development and approval. We look forward to breaking ground later in the fall.”

It is great that they are keeping the 1905 four story building in the front and I do like the bold design of the tower. I wonder if it will be lighted?

Here is what I typed up for our website: Tryp Hotel by Wyndham: New Rochelle Development

“Globally branded luxury lifestyle hotel & event center. The existing 1905 four story building will be restored and be the hotel lobby and event space. The 24 story tower will be set to the back of the property. Floors 1 through 4 will include restaurant, bar, catering space, meeting rooms, spa and conference rooms. Floors 7 through 23 will be 225 hotel rooms of which 75 will be extended stay format (larger size). There will be a rooftop pool with a hydro floor that can be raised for inclement weather. The iconic architecture provides the art betterment component. The developer is adopting the highway medians, providing plantings and creating a pedestrian bridge to connect to the downtown and train station. It will connect to the LINC. The developer is Ward Capital. The architect is Gregory Sharp Architect, PC.”

I screen captured a few slides: 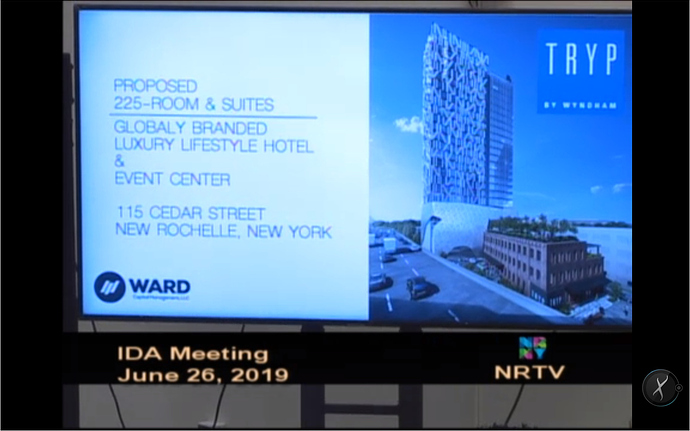 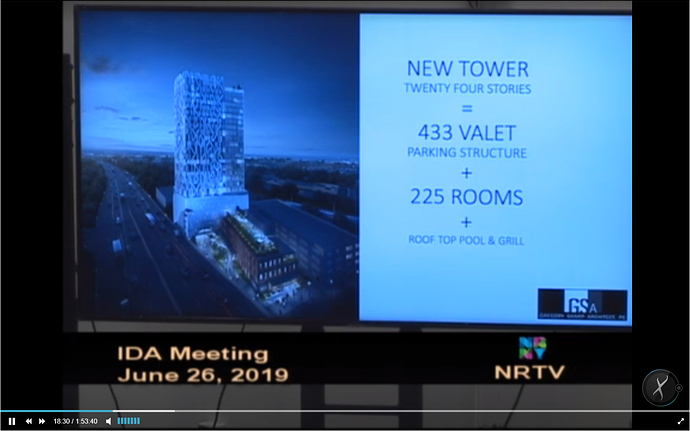 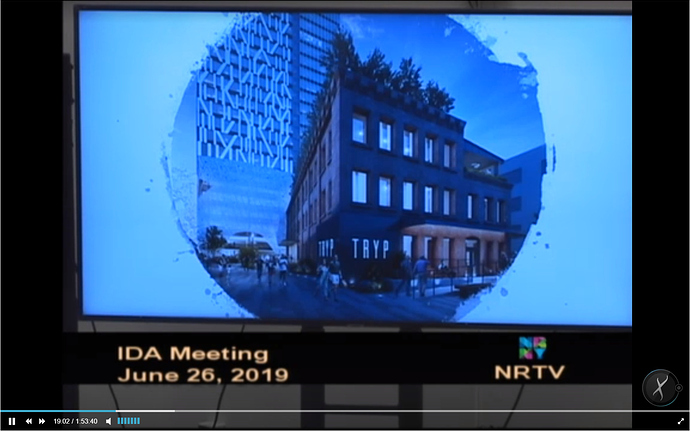 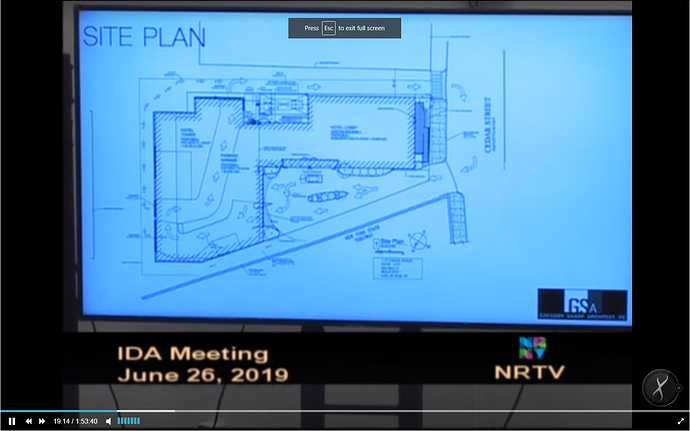 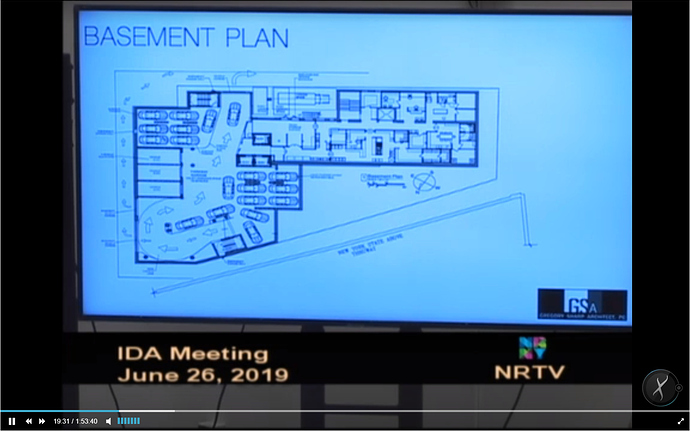 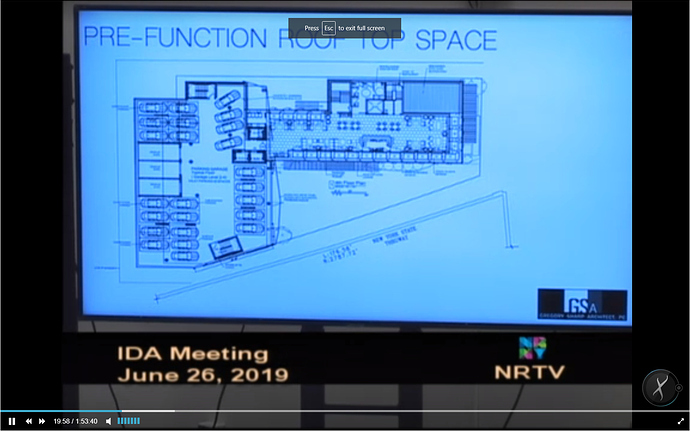 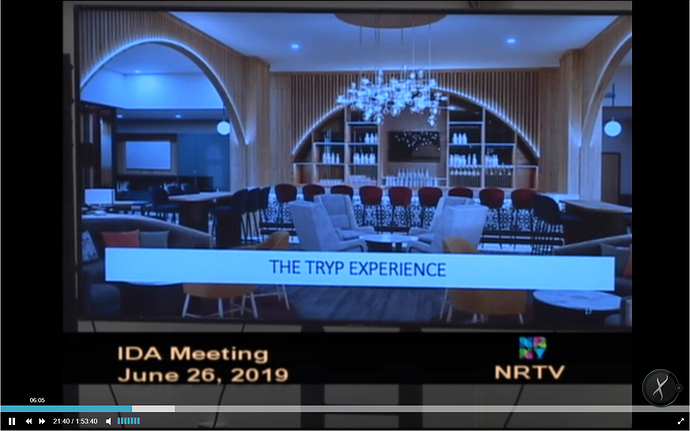 Sad to hear this 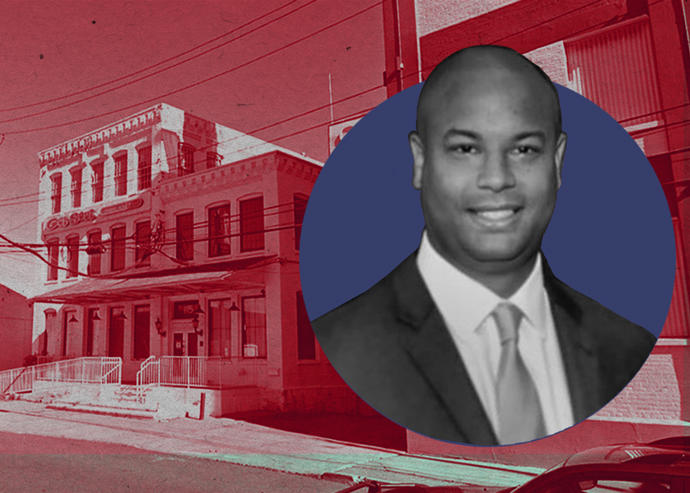 The largest hotel in Westchester County in 20 years, pegged as a catalyst for downtown New Rochelle, filed for Chapter 11 bankruptcy.

Hopefully they’ll get another hotel operator. That part of Westchester could use a higher-end hotel. 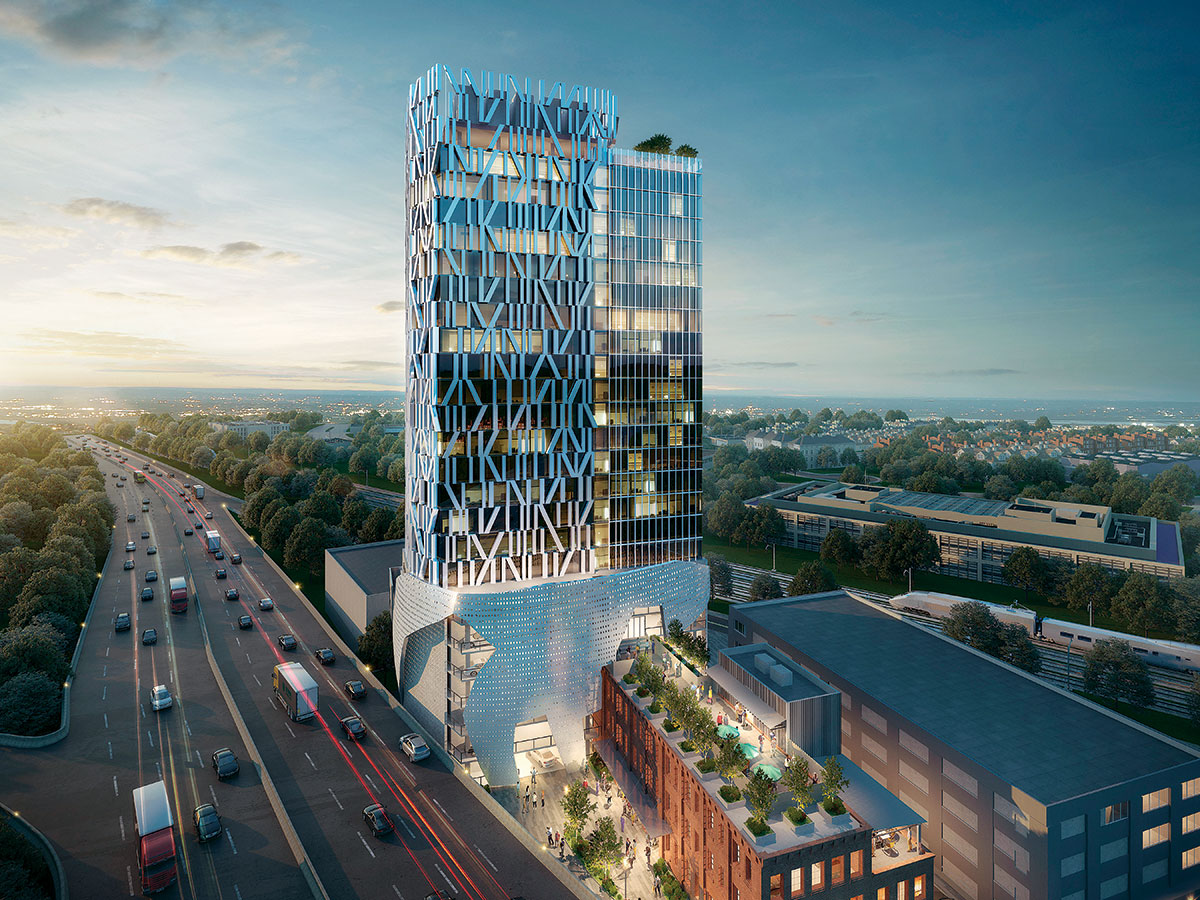 New Rochelle Hotel Project Is Plagued by Bankruptcy and Lawsuits 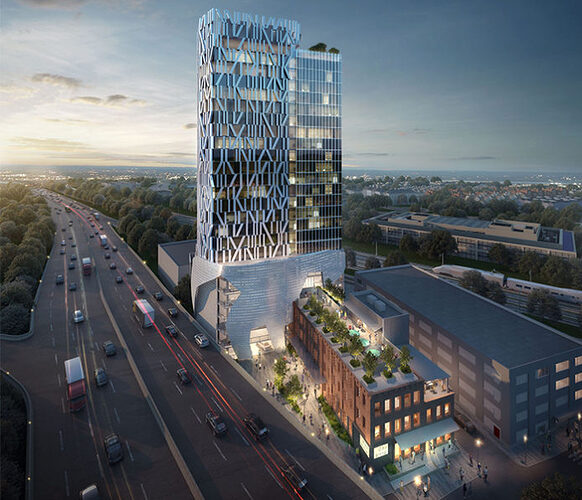 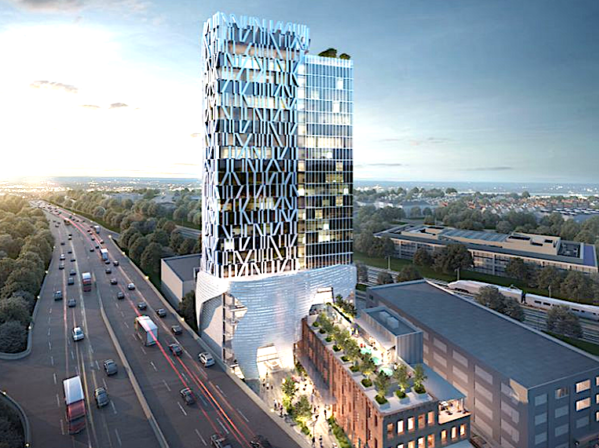 A piece of property that had been envisioned as being ideal for a hotel is being offered for sale in an auction that is due to receive final bids from qualified bidders on July 19. The property is at 115 Cedar St. in New Rochelle, adjacent to I-95....

I was very hesitant to share this news as it may be viewed as sensitive info, but it is worth sharing.

The property at 115 Cedar is scheduled to be demolished within the next few weeks. The hotel project is long gone and dead; inside sources have told me that it will instead be an addition to the already existing adjacent CubeSmart storage facility. Whether it’s the same brand or not, I’m not entirely sure, but it is all but confirmed to be self-storage.

Perhaps more info will be available with the upcoming Planning Board meeting.

that’s unfortunate. But at least the site will be used for something and its not an inappropriate usage for a site right up against the interstate like that.