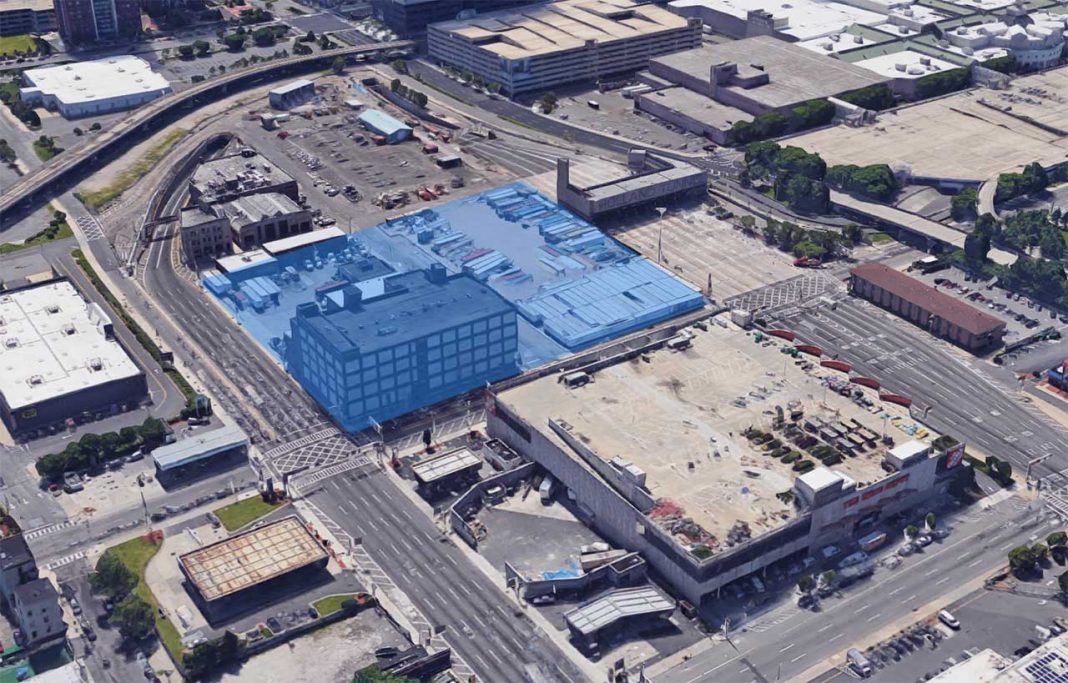 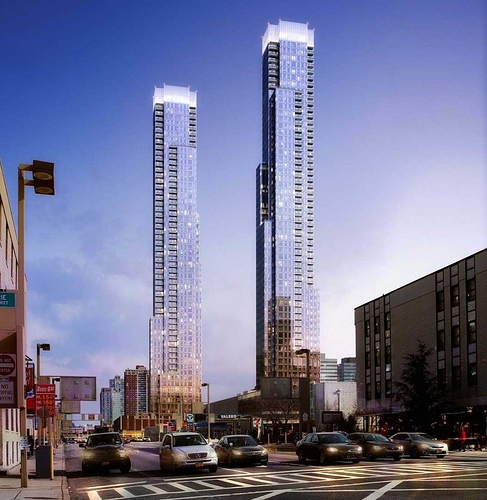 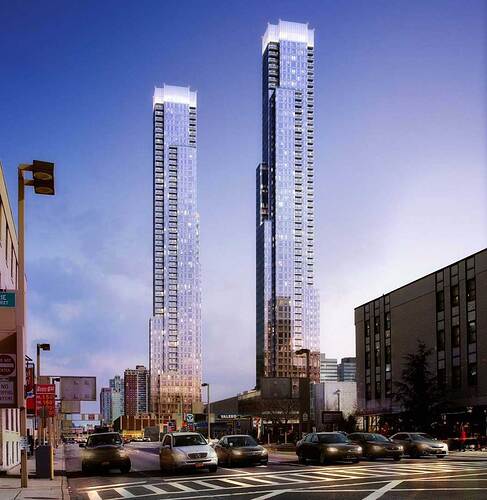 A rendering has been released for the now-approved, two-tower mega-project just outside the Holland Tunnel in downtown Jersey City.

750 residential units, 240k non-residential use and 1,098 parking spaces. Approved on August 15th with some conditions pending. Neighborhood association wants to do a traffic study, considering that the Holland Tunnel is right next to it. Should be fine. Looks similar to the Silver Towers in Manhattan!

Wow. Great update! Never heard of this proposal before. The rendering looks great too and I can see the similarity with silver towers.

The location is horrible considering they want to have 1100 parking spots. There is no good way to get in and out of the building for drivers unless they somehow connect the entrance/exit of the ramp to the entryway/road to the giant parking garage to the mall across the entrance to the tunnel. They should eliminate all parking spots and force the residents to use public transit. The location is close enough to hoboken terminal, newport PATH and the newport mall light rail. Plenty of options for transit!

Yes, the location is questionable. And I wish they would somehow keep the old building. A part of me wishes this doesn’t go through. They just finished the large mural on that building and it’s great.

The thing with eliminating the parking and forcing residents to walk is that they have heavy car traffic on either side of them, isn’t it a bit dangerous? But I agree, they should utilize the transit infrastructure. The more people use it, the better transit options become.

I can’t wait until this is built!

Yeah, I agree that this proposal has a horrible location. I’m also generally in favor of less parking in these buildings and encouraging more transit. But like the726 says, this isn’t the most pedestrian-friendly area. In general it’s not a good area for walking or for driving. You have to cross like 8 lanes of the highway just to get to the Newport PATH, or really to get to anything of interest besides Home Depot and the liquor store!

An 1100-parking space garage is super-expensive to build, around $40-$50 million. I don’t see them getting high enough rents in this location to justify the added construction costs of a huge parking garage and high-rise towers. People who can pony up that much money for a high-rise apartment plus one or two parking spots don’t want to live literally in the middle of a noisy and polluted highway!

At the end of the day, it’s the banks that decide which projects get built by lending their money to them. There are many other approved projects in much better locations that aren’t getting financing (e.g., 1 Journal Sq), so I don’t see this one happening in the next few years.

There’s a small possibility that they will allow others to use the parking deck which might give it a more favorable view with the city. There’s a hotel under construction a few blocks east, they might take some space. But yes, it’s still a bad area for it. I’d rather see URL 2 and 3 than this haha

I’d rather see URL 2 and 3 than this haha

I’m willing to bet good money that URL 2/3 will happen before this! Also the second tower of the Vantage (155 Marín Blvd), JSQ 2/3, the rest of Hudson Exchange West, etc etc. Hell, even if we just stick to the Newport area, the lots where the Staples and Target are located are each zoned for 60-story towers and much closer to the waterfront and PATH stop.

There’s a small possibility that they will allow others to use the parking deck which might give it a more favorable view with the city.

The garage is also supposed to be used for the 240k of retail. But retail isn’t doing great these days, which is another strike against this project.

They already got Planning Board approval, so they’re free to go seek financing for this project and build it as soon as they get the money. I wish them luck (they’ll need it!).

Oh, by the way, we should be skeptical of the info about the number of parking spaces on these multi-phase projects. On 808 Pavonia (the Harwood project) the Planning Board’s agenda reported that there would be 970 parking spots for 1189 apartments, but I got to look at the actual site plan and it’s only 450 parking spots. What happened is that they added the temporary parking spots for phase I (520 spots, which includes the garage that’s already on the site) with the final number of parking spots after full build-out (450 spots). Maybe it’s the same situation with this project.

Speaking of Vantage, there’s digging going on at a plot next to the garage. Smaller plot, so might be the hotel? Or the second tower.

I wouldn’t support a tower over my beloved Target unless it’s incorporated into the tower there! Haha

And thanks for the insight! Yes, retail isn’t doing great at the Soho apartment buildings further east, so this shouldn’t be any different. They need to make that light rail stop if they want more foot traffic/ retail.

And that’s quite sneaky with the parking spot numbers. I’m sure it’s something similar here. Although this is a much bigger site.

The company behind a 750-unit development is looking to prolong approvals already in place as they negotiate with the Port Authority to bring infrastructure improvements to the property.

Good update. I’ve often thought about capping over the entrance to the Holland tunnel (I know that’s not exactly what they’re proposing here) but the approach to the tunnel is a car-centric barrier that divides Newport and basically destroys any “walkability” features north of 78.

I’ve often thought of the neighborhood bound to the south by 78, the north by the Hoboken train yard and east by the river as this weird, “no man’s land,” prime for development. Sure, you have the cast iron lofts, and some other developments going in. But creating a realistic PEDESTRIAN FRIENDLY connection over 78 and the tunnel is key here.

Ideally they could move the entrance and exit of the holland to at least jersey ave. The question is who would pay for it

September is coming in a few months. Looking forward to these twin towers that will certainly make a statement to drivers out of the Holland Tunnel.

Awesome. Can’t wait for these to go up. The unofficial 6th bourough continues to put up huge development after huge development. If Brooklyn doesn’t watch out, they may be the ones found lacking in a few years. Well besides Brooklyn Tower that is.

In any case, we will probably have a solid update for these “twin towers” before the extension expiration …. Before September.

No movement. IMO it was pretty clear these didn’t have a good chance of happening for years, given all the vacant sites in more desirable locations downtown and in Journal Square that haven’t been built yet.

It’ll happen someday, but lots of other buildings are going to be built first.