The scandal surrounding New Jersey Governor Chris Christie has another twist, and this time, a development by The Rockefeller Group could be threatened. Mayor Dawn Zimmer has asserted that Christie officials forced her to support the project — which she should have done anyways — and she is now publicly attacking the Governor. The ensuing battle could ensnare Rockefeller’s proposal in the process.

In addition to The Rockefeller Group’s project — which is on the city’s northern end — Hoboken’s transit terminal is also being redeveloped. The common thread between the developments is a lack of mayoral leadership and the fostering of barriers against growth, rather than the creation of solutions that could benefit the entire community.

Hoboken Terminal has seen little press, but the proposal is impressive, and would convert vacant, unused railyards into a thriving mixed-use hub, in a plan devised by SOM. The entirety of the development would comprise nearly three million square feet of new space, adding over five acres of parkland in the process, but approval has been held up by NIMBY politics. Nearby residents prefer that the land stay dilapidated and unused.

The Rockefeller Group’s plans would be a similar boon to the city, and the proposal — which has not been publicly revealed — is worth $1.1 billion. Rockefeller will build 1.8 million square feet of office, as well as 300 condominiums and 85,000 square feet of retail space. The redevelopment would be an economic boon to the community, which suffered enormously during Sandy.

While it is unfortunate partisan politics are clouding the development’s future, it is clear that Hoboken could stand to benefit from the project’s completion. If Mayor Zimmer had actual foresight, the allegations against Christie would not have come at the end of a bandwagon that began in Fort Lee, and perhaps she could have bartered additional development rights for funds to protect Hoboken from climate change during the negotiation process.

Indeed, at Hoboken Terminal, concessions were made during the proposal phase, and the overall scope of the plan was reduced; the community was heavily involved in the discussion, which resulted in the current, scaled-back version.

Despite knee-deep evidence, NIMBYs in Hoboken have failed to notice that rising sea levels pose a greater threat to the city than anything else; while locals may be fighting development, the real threat comes from the Hudson River, which caused enormous flooding during Hurricane Sandy.

Combined, Hoboken Terminal and the Rockefeller project promise major benefits to the community, providing a crucial injection of capital following the city’s submersion at the hands of Sandy. But protecting Hoboken from additional storm surge events is crucial, and seems to have been ignored by city leaders. There is room for a solution that benefits everyone, and it would include coastal defenses to protect the city.

HOBOKEN — As proposed plans for redeveloping the Hoboken rail yards move forward, the city planning board also recommends that the city council consider the project’s height and how it will affect existing businesses.

The planning board ruled on Tuesday night that the latest released redevelopment plan complies with the city’s master plan, but it also passed along several recommendations for the city council. Recommendations included considering the proposed height of the commercial buildings in the plan — a maximum of 22 stories, 24 if certain design requirements are met— and assuring that existing buildings will still be accessible.

The suggestions are just that— the council isn’t required to make any changes based on these recommendations.

During the public hearing, Dian and Mario Fini, who own Teak on the Hudson and several other businesses on Hudson Place, said they were concerned about the proposed pedestrian plaza at Warrington Plaza and Hudson Place. They fear that the plaza will eliminate vehicular access to their businesses, a problem they know all too well.

After Hurricane Sandy, their businesses suffered because Hudson Place was barricaded, preventing customers and delivery trucks from driving up to their businesses. Mario Fini said a pedestrian plaza would likely be a positive addition, but the city needs to keep property values of existing businesses in mind.

“It has lots of merit,” he said. “But a hybrid would be better.”

The city released the latest iteration of the redevelopment plan in October, considerably paring down the scale of previous plans for the site. The new plan calls for approximately 2.2 million square foot mixed-use project— with 125,000 additional square feet of commercial space possible.

Two-thirds of the proposed project’s buildings would consist of office space, with buildings reaching a maximum 24 stories. Residential buildings would reach up to 13 stories and include roughly 583 units, 10 percent of which will be designated as affordable housing.

A plan that could allow three new developments to rise near Hoboken’s train station is being challenged in court by two holding companies that have recently initiated a lot of litigation.

On May 11, a fresh lawsuit was filed in Hudson County Court over amendments that were enacted earlier this year to the Hoboken Yard Redevelopment Plan. Naming the city and its council as defendants, the plaintiffs’ case claims that the latest plan is too vague and fails to “sufficiently indicate the proposed land uses and building requirements.”

Plans to revitalize several parcels owned by NJ Transit near Hoboken Terminal have been in the works for decades, with the most recent version envisioning 1.3 million square feet of development split between a trio of commercial buildings along Observer Highway. Passed by the council in February, the scheme would allow different building heights depending on the findings of feasibility studies.

Those stipulations are at the heart of the legal challenge and the property known as Site 2 under the plan is cited throughout the lawsuit. The redevelopment proposes a 330-foot office building at the property that is “subject to a financial feasibility study to be conducted by the City to determine if the property can be developed as commercial or mixed-use residential.”

But according to the lawsuit, the amended plan “does not set forth the proposed building requirements in the event Site 2 is developed for residential use.” The complaint also takes issue with other ambiguities in the plan, as it allegedly “does not describe the process by which Hudson Place would be utilized by or otherwise conveyed to NJ Transit in connection with the Hoboken Yard Redevelopment.”

“Moreover, whereas the 2014 Plan had a very detailed stepback regulation framework tailored to each development site, the proposed amendments only specified stepback requirements for Site 2,” the complaint says.

The end result of the amended plan, according to the case, is that it “merely sets forth the potential land uses in the Hoboken Yard Redevelopment Area, and expressly indicates that the land uses may change depending on the outcome of future studies.” 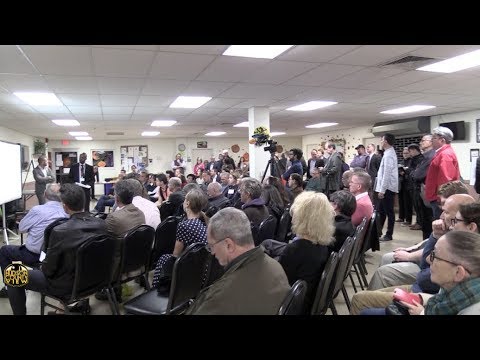 A plan to revitalize the neighborhood surrounding one of New Jersey’s largest transit hubs is hoping a new group of partners will help bring the project closer to reality.

[COLOR=“Purple”]New York-based LCOR, the master redeveloper of the Hoboken Yard Redevelopment Plan, recently revealed the team that will be working on the long-stalled project. The most recent scheme for the area was approved early last year and allows a maximum of 1.3 million square feet of development over three properties just north of NJ Transit’s rail tracks.[/COLOR]

A major component of the plan includes the long-envisioned renovation of Hoboken Terminal and neighboring Warrington Plaza. That component could include amenities like an outdoor market space plus a revitalization of the second floor of the structure, which has been closed to the public for many years.

I can’t wait to visit a renovated Lackawanna Terminal. The terminal/ plaza area has so much potential. This is a good team!

With the Neumann Leather redevelopment, the new hotel, and the DPW garage also underway, this whole area will look very different. Let’s hope they mitigate the flood issues!

After 16 years of deliberation, plans to revitalize Hoboken's waterfront are moving forward.